Advantages of the pulse method in photobiomodulation therapy

Red and infrared radiation therapy has been known for more than 50 years. Several thousand scientific publications have been written about it, with more being added every year.

Less well known is that red and infrared therapy can take countless forms. One or more wavelengths of different intensity can be used, the wavelengths themselves can be different depending on the radiation source, and finally the protocol itself differs between individual experiments. This ambiguity in procedures is one of the reasons why red light therapy still does not have an established standardized protocol.

The differences themselves also exist in the setting of the radiation source. We recognize the standard continuous method and the increasingly popular pulse method. In this article, we will show what benefits the pulse method of therapy with red and infrared radiation can represent.

How does the pulse method differ from the continuous method?

The photobiomodulation method has been used and studied therapeutically since 1967. For many years, photobiomodulation therapy was practiced using a continuous method. This simply consists in the fact that for a predetermined period of time (3 minutes, 10 minutes) the tissue is exposed to continuous red or infrared radiation of a certain intensity and wavelength.

The pulse method represents a more modern approach. The tissue is not irradiated with a continuous stream of light, but only in certain pulses that have a clearly defined pulse width (= the time when the radiation source lights up, usually measured in milliseconds) and frequency (= how many pulses it makes during 1 second, measured in Hz).

In the pulse method, the time when the source of radiation is turned off and does not shine alternates periodically with the time of the pulse, when the source produces red or infrared radiation. Compared to the continuous method, in these short pulses, a significantly higher source power can be used than that used for a continuous source.

The possibility of choosing between the continuous or pulse method is generally very common among spectrophotometric techniques. Probably the best-known example is the NMR (Nuclear Magnetic Resonance) method, which also relied on the continuous method in the early stages of development, while today it is almost exclusively measured in the so-called pulse mode. 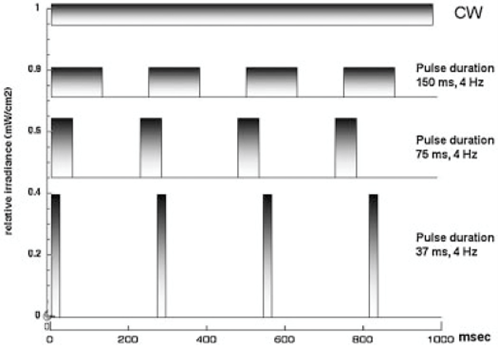 Advantages of the pulse method in photobiomodulation therapy

The heating of tissues exposed to red and infrared light is a disturbing phenomenon that we try to avoid in therapy. In the case of the continuous method, this phenomenon limits the maximum usable power, because when it is increased, too extensive heating of the skin occurs.

This is one of the biggest advantages of the pulse method. By periodically switching the radiation source on and off, the tissues are not heated, the experiments even observe almost no increase in skin temperature. It can be assumed that this effect stems from the fact that the radiation source is switched off for a significant part of the overall therapy and the tissues have time to transfer the excess energy to the surroundings.

Some scientists also discuss the possible resonance between the frequency of the radiation used (mostly in the order of units, tens or hundreds of Hz) and the frequency of some biological processes that occur in the human body.

It is biological resonance that is discussed, for example, in the case of transcranial photobiomodulation therapy. Several brain waves are described today, of which the most well-known alpha and beta waves have a frequency in the lower tens of Hz. It is biological resonance that can explain why the pulse method seems to be a more effective choice in transcranial photobiomodulation therapy.

There is also often talk of deeper penetration in the case of using the pulse technique. However, a little more detailed explanation is needed here.

The relative penetration of radiation depends solely on the wavelength of the radiation used. The advantage of the pulse method is the fact that at the time of the pulse, an order of magnitude more photons fall on the surface of the skin than in the case of the continuous method with a device of the same average power, i.e. red and infrared light reaches the deeper layers of radiation at a higher intensity.

For example, if tissue therapy is being performed, where it is necessary to reach a depth of 5 or more centimeters, pulse methods are the only way to achieve such deep tissue penetration. Such a case can be therapy of the hip joint, neck or back.

What do scientific studies say about pulse technology?

The pulse method has been found to be more effective for post-injury therapy, to support muscle regeneration and for pain.

The summary review concluded that the effective frequency usable in pulse therapy is already from 2 Hz up to 8 kHz. No significant differences between individual frequencies were observed. In practice, frequencies in the order of 10-20 Hz are most often used.

The technology of pulsed photobiomodulation therapy is offered by the only company on the Czech market – Nuovo Therapy. The pulses are adjustable up to a frequency of 20 Hz, which supports the possibility of deeper radiation penetration without simultaneously heating the tissue.

The pulsed method of therapy with red and infrared light is a modern approach of photobiomodulation therapy, which proves to be effective in therapy after injury, in tissue healing or in therapy of the joint apparatus. With pulses, higher power can be used for the duration of the pulse without simultaneously heating the surrounding tissues, which could lead to their overheating caused by the continuous flow of photons to the skin.

Also when using the pulse method, it is advisable that the radiation source provides at least 2 wavelengths, one of which will be aimed at the red light region (630-660 nm) and the other at the infrared radiation region (800-950 nm).