Photobiomodulation therapy based on red and infrared diodes finds the greatest use among athletes to support regeneration, some studies also investigate the possible support of physical performance probably due to the induction of increased activity of the electron chain in mitochondria.

It is currently one of the most popular biohacking techniques, it is remarkable that although it became more widespread only in the 90s of the last century, today it already has several thousand scientific studies that deal with its effects.

A special category is the use of photobiomodulation therapy to support skin elasticity, collagen production and in cosmetics. Surprisingly, even here it does not stop at one study, today we already have a number of publications that confirm this effect. How does it work and what can be expected from red light therapy?

Why red and infrared light?

Red and near-infrared radiation has the property of being able to penetrate deeper under the skin compared to shorter wavelengths, red light (630-700nm) is thought to penetrate about 6mm, infrared light is even more. It is assumed that the photons from this radiation fall on the proteins of the electron transport chain on the inner mitochondrial membrane, where they are absorbed on the respective chromophores (the most often mentioned is cytochrome c oxidase), thereby influencing the activity of these proteins.

To date, there is no agreement on the optimal wavelengths of radiation used, but in the vast majority of cases, we are talking about wavelengths from 630 nm (red light) to 950 nm (near infrared light). The simultaneous use of both red and infrared light sources is very common. Although the exact mechanism is still not clear, it appears that the use of both types of light leads to better results.

Photobiomodulation and self-production of collagen fibers

In 2014, the first scientific study was published that looked at red and infrared light therapy and its effect on skin regeneration and the natural formation of collagen fibers (Wunsch et al., 2014). Research on more than 130 participants in the experiment showed that after 30 photobiomodulation therapies (planned twice a week), there was a demonstrable increase in collagen density in the skin, an increase in skin elasticity and a reduction in wrinkles. The record of the increase in collagen density in the skin can be seen in the following image – on the left, the record before therapy, on the right, the record after completing 30 therapies with red and infrared light (taken from the scientific publication Wunsch et al., 2014): 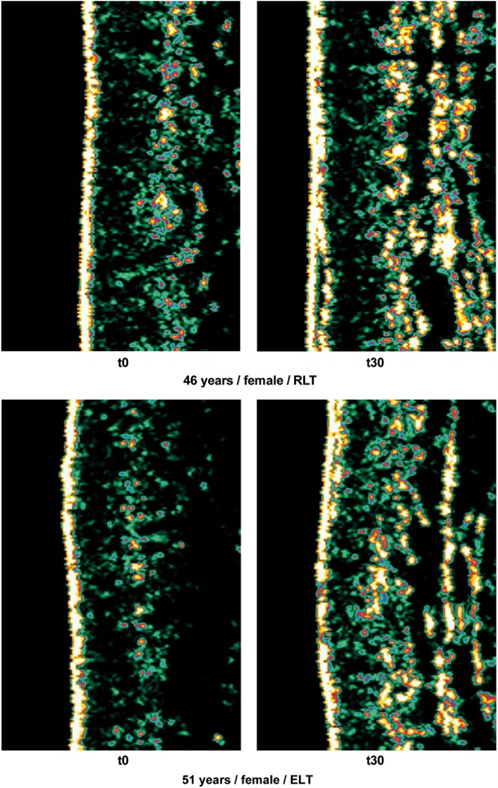 Increased self-production of collagen can have a number of positive benefits for both athletes and the non-athlete population. In the same study, the researchers also focused on the smoothing of wrinkles, the results after 30 therapies with red and infrared light are shown in the following image – above, the state before the start of the therapy, below, the state after completing 30 therapies (taken from the scientific publication Wunsch et al., 2014): 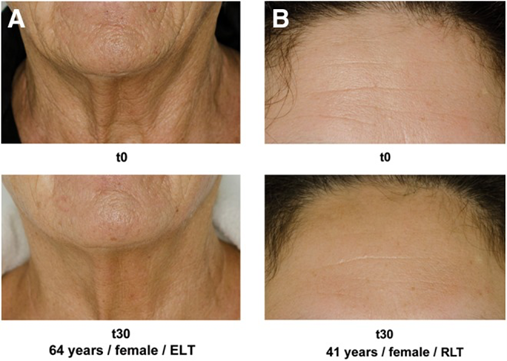 Red and infrared light therapy has gained considerable popularity in dermatology over the years, with more than 3 million dermatological procedures using photobiomodulation therapy performed in 2017 alone, according to the American Society for Dermatologic Surgery.

This study convinced me to buy the Infrared Panel. Now, after 45 days of application 10-15 minutes a day, we have photos for comparison, where the smoothing of wrinkles and the turning off of the skin are visible (Fig. 1).

Infrared light therapy also has an effect on hair growth. In picture 2 you can see the hair growth in 2 months. 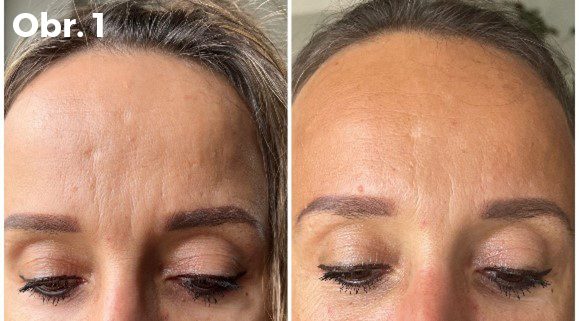 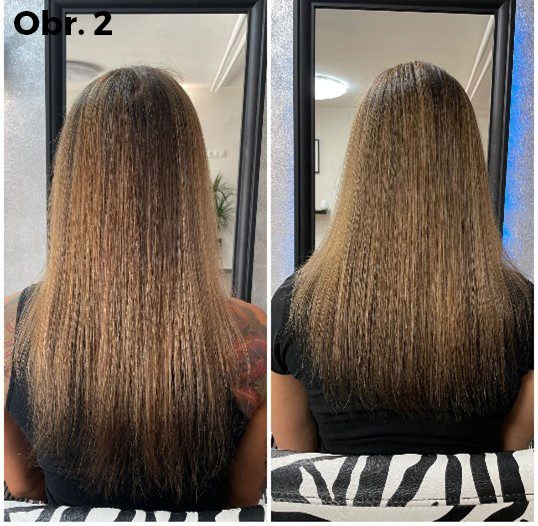 Other studies also confirm the effectiveness of photobiomodulation therapy

Positive conclusions are also reached in an in vitro study from 2021 (Wen-Hwa Li et al., 2021). In this experiment, human skin fibroblasts were irradiated with red and infrared light for 10 minutes each day at an intensity of 0.3 J/cm2. Regular exposure of tissues to red and infrared radiation was found to result in increased expression of collagen and elastin building proteins, which are essential for healthy skin elasticity and firmness.

A relatively new approach is also low-energy irradiation using lasers emitting light in the red and infrared light range. It was also shown here that photons of the specified wavelength can have a reparative effect on human skin, can slow down skin aging and help in skin regeneration after damage caused by various interventions (UV radiation from intense sunlight, tattoos, etc.).

Are red and infrared light safe?

Radiation in the wavelength range of red and infrared light hits our skin naturally from sunlight, it is not an “artificial” source of light that the skin is not used to. Recently, 2 scientific experiments have been conducted that looked at the safety of this therapy in relation to possible side effects (redness of the skin, rash, etc.).

Red and infrared light therapy is used in many areas of the human body. Recent studies show that regular photobiomodulation therapy makes it possible to increase the own production of keratin and collagen, which are the body’s own proteins that ensure the strength and elasticity of the skin, ligaments and tendons.

The most promising in this regard seems to be the combination of red and infrared light in the wavelength interval from 630 nm (red light) to 950 nm (near infrared light). Keep in mind that positive effects can only be achieved with regular therapy at least several times a week, and the first changes should be visible after a few weeks at the earliest.