Effect of photobiomodulation therapy on recovery after injury

Red and infrared light therapy is most commonly used to promote recovery in athletes, with some scientific studies also observing sports performance enhancement. In addition to athletes, photobiomodulation therapy is also used in cosmetics, as a number of studies have shown that red and infrared radiation has the ability to support the de novo production of collagen and elastin, which results in an increase in the flexibility and elasticity of the skin, the smoothing of wrinkles and an anti-aging effect.

In this article, we look at the effect of red and infrared light on promoting recovery from injury. How does photobiomodulation therapy affect tissue repair and what effects can be expected?

Briefly about the mechanism of photobiomodulation therapy

Compared to white visible light, red and especially near-infrared radiation has the property of penetrating deeper into tissues. At the same time, unlike more energetic radiation (e.g. UV light), it does not have enough energy to lead to changes at the DNA level, so its exposure is much safer for skin health than intense sunlight or radiation from solariums.

It is expected that the radiation source used for photobiomodulation therapy impinges on the inner mitochondrial membrane on the proteins of the electron transport chain, where it is absorbed. Fundamentally, two basic mechanisms of its action are postulated:

Both effects reduce the pro-inflammatory environment and support the antioxidant capacity of the cell. Illustratively, we can show them in the following picture (taken from the publication Yamada E.F. et al., 2020): 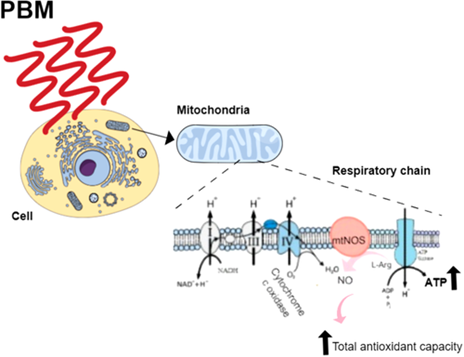 In principle, it is still the same mechanism, which also explains the effects aimed at athletes or the support of skin elasticity. The radiation source is also similar, different light sources are used in the wavelength range from 630 nm (red light) to 950 nm (infrared radiation). A very common procedure is the simultaneous use of several wavelengths at once.

From post-training regeneration support to injury use

A very common use of photobiomodulation therapy is regeneration after a training session. Studies show a reduction in muscle injury in subjects who include red and infrared light therapy after training, which is accompanied by a reduction in creatine kinase levels in the post-workout period (Ailioaie L. et al., 2021).

However, it is likely that similar effects can be used for more serious injuries than minor muscle injuries caused by strength training.

In a recent 2021 study, again in animal subjects, Achilles tendon injury was artificially induced (Akamatsu F. et al., 2021). By exposure to infrared light with a wavelength of 780 nm, it was shown that tendon injury tended to have a faster repair process compared to subjects not exposed to photobiomodulation therapy. The researchers considered two possible mechanisms:

The increased expression of collagen proteins can be seen in the figure below, in white columns are subjects exposed to photobiomodulation therapy, black columns indicate the group without therapy. The left column represents the scale from 0 to 1% (taken from Akamatsu F. et al., 2021): 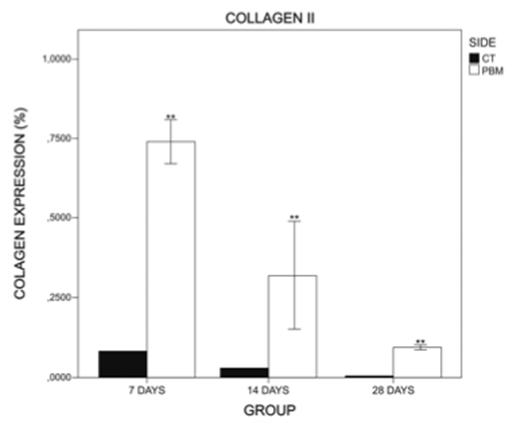 One of the latest publications is a review of preclinical studies from the beginning of 2022, which included a total of 22 studies conducted so far, which dealt with the effect of photobiomodulation therapy on tendinopathy, a painful tendon disease that is one of the most common injuries among athletes (Alzyoud J. et al. , 2022).

The researchers stated that red and infrared light therapy can indeed be a potentially interesting tool as a supportive method of recovery, but it still has a long way to go. The method of use differs considerably across studies: (1) the wavelengths used differ, (2) the energy of the radiation used and (3) the method of evaluating the effectiveness.

Red and infrared light therapy is an interesting tool that also finds its use in convalescence after injury. A whole series of scientific experiments carried out on animal subjects shows that the use of near infrared radiation in particular seems to be effective in reducing the pro-inflammatory environment and in promoting the production of its own collagen. Although based on the studies conducted to date, photobiomodulation therapy still cannot be considered as a routine means of promoting recovery after injury, there is ample scientific evidence to build on in the future.